ALEXANDER AMEY BOLLAR, CHAMPION OF SPAIN INDIVIDUAL U8 – U10 – U11 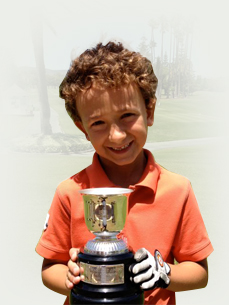 Alexander Amey (DOB 26-04-2005, Sotogrande) above all, enjoys playing golf more than anything else. He lives in Portugal at the Amendoeira Golf Resort with his parents, Richard and Marilo, with their full support for his passion for golf since his third birthday when he received his first set of plastic golf clubs and balls.

Who could have imagined how significant this would become? He would spend hours playing in the garden with them until, as of today, this passion would result in him winning over 60 national and international trophies despite his young age. An impressive milestone when you consider that his enthusiasm for golf is instinctive, as there are no family ties to the game.

At only 6 years old, he became a member of the Golf School at La Cañada, Spain and by the time he was 7 years old he'd already had 2 victories in the Fase Final del Pequecircuito de Andalucia under his belt, amongst many other prizes. At 9 years old he joined the real club de golf Guadalmina under the umbrella of Antonio Jimenez which contributed to further improvements and more success. Additionally, he is also a member of the Real Club de Golf de Sotogrande, where he was honoured to received a plaque in recognition of his 3 biggest achievements as National Champion of Spain Benjamin U10 in 2015 and U8 in 2013 and Champion of Spain Alevín U11 in 2016. This is a level which few attain and reflects the true quality and aptitude of Alexander as a player.

In January 2017 he moved with his parents to Portugal and started a new collaboration with the experienced coach Joaquim Sequeira head of the Club de Golf Vilamoura school . Alex continued his progression with some great results throughout 2017 before suffering a long illness in 2018 which prevented him playing any sports for 6 months. He slowly recovered and rebuilt his game in 2019 with some outstanding performances although still irregular. 2021 was a very successful year for Alex in terms of results at national and international levels and for being ranked within the World Amateur Golf Ranking (WAGR).

We use cookies to ensure that we give you the best experience on our website.
I accept